Fresh OBX Seafood and Much More

A longtime fixture on the Outer Banks, Mako’s Restaurant is a family-friendly restaurant with menu offerings to satisfy any palate. From seafood to steaks to great kids’ choices and even pizza, restaurant co-owner Mike Kelly says the goal at Mako’s is to bring a wide variety of fresh food to the menu.

“Welcome to the Outer Banks, please enjoy yourself…..if there is anything we can do to improve for your visit please let us know.” 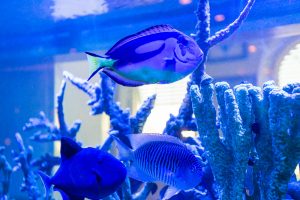 Mako’s opened on the Outer Banks in 1995. The restaurant is named after the mako shark, and they hand out shark’s teeth to kids that come through their doors (or grown-ups that are young at heart!). One of the first things you’ll notice upon arriving at Mako’s is the saltwater fishtank, which is the largest on the OBX. You won’t find any sharks in it though!

The owners and staff at Mako’s are always on the lookout for new ways to make their customers happy and keep them coming back.

Mako’s co-owner Mike Kelly has been on the OBX for about 50 years and is no stranger to the Outer Banks restaurant business. He worked at two different restaurants on the OBX before buying his first restaurant when he was 35. Throughout the years, he has owned or co-owned George’s Junction, Kelly’s Restaurant, Pamilico Jack’s, and Mako’s.

“Customer service, that’s one thing that does not change.”

The menu at Mako’s truly has something for everyone. Fresh NC seafood, aged Angus beef, and woodfired pizzas all have a spot on the menu. There’s even an extensive kids menu for the little ones.

Mako’s updates their menu on a regular basis and they always strive to provide a wide variety of dishes to choose from. Many appetizers and entrees feature locally-sourced OBX seafood, like oysters from Hatteras, shrimp from the Pamlico Sound, and tuna when it’s in season. When flounder is in season, they have several entrees to recommend that feature this fresh local fish.

In addition to fresh seafood, aged Angus steaks and prime rib are offered. A woodfire oven is available to make pizzas, as well as their amazing Wood Oven Baked Oysters Rockefeller.

The bar menu is equally as impressive, with beer, wine, and an assortment of house-specialty cocktails. Refreshing summer favorites, either frozen or on the rocks, may come garnished with fresh fruit or a tiny umbrella. 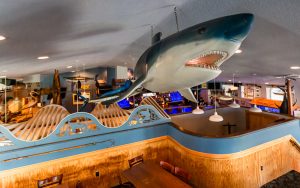 Catering is offered through Mako’s sister company, Kelly’s Outer Banks Catering. Prior to the holiday, you can reserve a fully cooked Thanksgiving meal, available for delivery or pickup the day before Thanksgiving or the morning of.

Their famous sweet potato biscuits, either with or without country ham, are a delicacy well-known to visitors and locals throughout the Outer Banks. These tasty biscuits are available for pre-order at both Mako’s and Kelly’s Outer Banks Catering.

Mako’s thoroughly cleans their restaurant prior to opening and tables are socially distant. All customers check-in at the door and the 3 W’s are taken seriously, which includes wearing a mask.

Stop at Mako’s in the Off-Season 🚗

Mako’s is located in the heart of Kill Devil Hills, so you’ll pass it on several of our off-season Outer Banks itinerary recommended routes. Stop in for dinner to fuel up after a fun day of exploring the OBX.  Source: Twiddy.com